You might have heard the term “skill-based slots” thrown around a few times, but chances are you haven’t really taken much of an interest in it besides that. And why would you? They’re not exactly commonplace in UK online casinos, unlike the plethora of other casino games online and offline which are available here. Are they a legitimate type of casino entertainment which, just like videoslots, is here to stay, or are they a mere fad that’s going to disappear very quickly?

There is no one answer to this, not without a crystal ball, at least. But we did our research, and we’re ready to throw our hat into the ring and give our own thoughts on whether skill-based slots are truly viable in the current UK environment! Before we get to the heavy stuff, though, let’s take a closer look at the state of slots and try to discover whether they have a place in it, and, more importantly, what in the world they even are!

The Fall of Traditional Slots 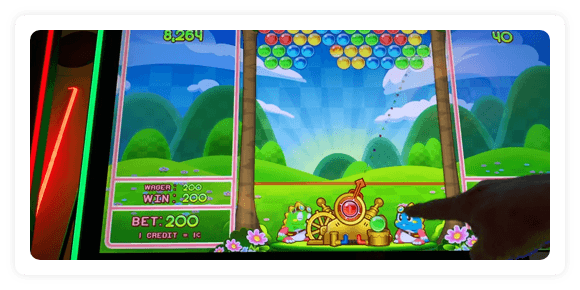 We all know how regular slot games work, right? After all, if you’re on a casino review site, then chances are you’ve got at least some experience playing slots, and you’re well acquainted with their particular type of gameplay… Or lack thereof. Yes, many (if not most) slots have bonus features, free spins, even the occasional extra game which lets you win a neat little sum by spinning a wheel or picking a box. But while some people will absolutely try to convince you that they have a ritual to win every time, like pressing the button 3 times in a row or refreshing the page after a big win, the fact of the matter is whether you win or lose is 100% up to chance.

Playing slots isn’t like blackjack or poker, and the only choice you are given is whether to play or not.

This, unfortunately, has made slots quite unpopular in recent years, at least in physical casinos. While in online spaces slots have never been stronger, the actual slot machines, with the buttons and big screens, are falling out of favor and quickly losing players to blackjack and baccarat. Why is that? Well, the answer lies in videogames and an aging demographic of gamblers. Gamblers who were children in the 80s or after grew up with gaming systems, and with over 50% of the UK population playing games, it’s very hard to impress most younger people with flashy animations and detailed 3D models. And as the “old guard” ages out of physical casinos, the new blood just… Doesn’t care about slots. Still, nothing breeds innovation like being backed in a corner, and so, starting a few years ago, slot providers have started to experiment with something a little bit different.

What are Skill-Based Slots? 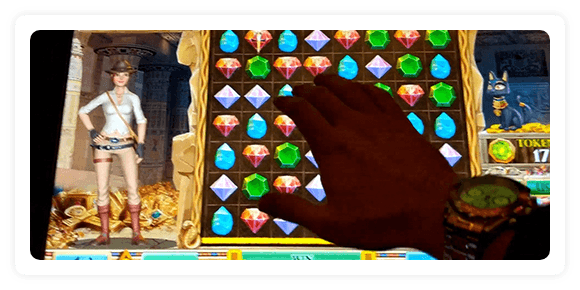 Truthfully, the moniker of “skill-based slots” isn’t entirely accurate, as many of them actually don’t have much to do with slots at all. They tend to be referred to as slots because that’s generally what most electronic games in casinos are these days (with the big exception of video poker), but in reality, they’re actually much closer to the arcade games of old rather than anything you’d typically see in a casino. Indeed, spinning reels and big levers often (but not always) take a backseat to hand-eye coordination and a quick, sharp mind. In fact, some of them, such as “Space Invaders” by Scientific Games and “Arkanoid” by Next Gaming are direct conversions of the classic arcade titles of the same names.

As the name suggests, how much you win – if anything at all – depends entirely on your performance at the game, not solely on luck.

Of course, while some slots (like Konami’s “Beat Square Tournament”) are entirely devoid of any luck-based systems and solely pay out based on your mastery of the game, this isn’t true for all skill-based games. Some, such as the aforementioned “Space Invaders”, will play as a traditional slot machine, and triggering the bonus round will reward you with a skill-based section where the more invaders you blast, the bigger your score is. Others still meet somewhere in the middle, such as Japanese “pachislots”, which combine a pinball-esque gameplay with interactive elements and a slot machine, with all of them influencing each other in various ways. A good performance at the pachinko element may trigger a bonus for the slot, or a lucky spin of the slot might give you additional balls to play with in the pachinko. Realistically, the exact nature of these skill-based casino games is entirely up to the developer… And, of course, to local legislators. Which brings us to our next question.

Are Skill-Based Slots Even Legal? 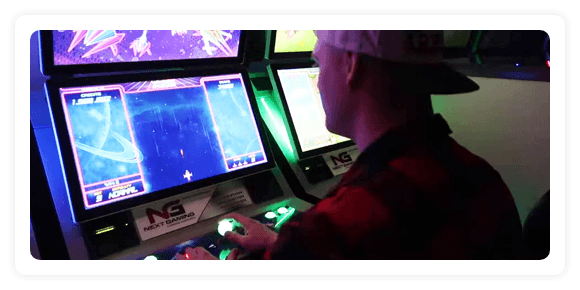 This is a very, very complicated question, and one that continues to be discussed to this day – not only in terms of “should they be legal/illegal”, but also in terms of the nuances that are involved in their legalization and practical application. For example, in the UK, skill-based games have been legal to have in casinos since 2005, according to the Gambling Commission. However, the legislation is broad and unclear, and tries to conflate numerous different concepts together, including purely skilled-based, non-gambling machines which you can find anywhere (for example claw machines or arcade videogames), skill-based non-electronic games (such as blackjack), games that appear to be skill-based and are presented as such, but are realistically chance-based (such as roulette), and, of course, skill-based casino games. There is no separate legislation for the latter, which should, in theory, make things pretty cut and dry. However, that’s not entirely the case.

UK gambling legislation’s murky wording has generally scared off developers who fear major repercussions for breaking a law that is poorly defined in the first place.

Indeed, the Gambling Commission (and, by extension, the UK government) has the power to penalize companies for breaching their regulations even if they’re only perceived as doing so. For example, back in the day you may have watched a few episodes of the popular TV show “Deal or No Deal”, which allowed players to choose a box with a monetary prize in it and then gradually eliminate the remaining boxes while bombarded with offers to either sell their box for a set sum to the Banker (even if you don’t know what’s in it). It was great fun, but unfortunately, the Gambling Commission took issue with it. They argued that, since there was no element of skill, “Deal or No Deal” was the same as a slot machine and may be in breach of its regulations… Despite the fact that “Deal or No Deal” is a TV show and not a slot machine. Yeah, we were scratching our heads at that one too. If a TV show can get in trouble for being too luck-based, it’s looking like just a matter of time before a slot gets in hot water for not being luck-based enough. The laws that define what classifies as a “skill-based game” and not, and what should or should not be subjected to gambling regulations, are simply not defined well enough at the present moment.

Hope for the Future 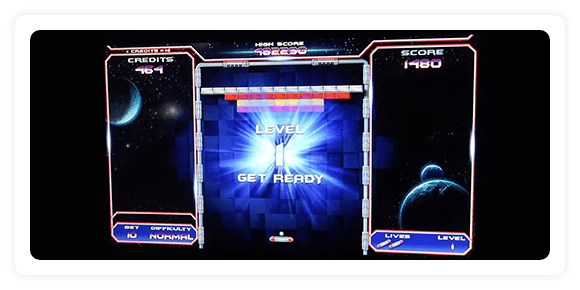 Despite everything, there’s a decent chance that we’re going to see skill-based slot games make it big in UK casinos very, very soon. Why? Well, they’ve already been making big splashes overseas! States like Pennsylvania, Massachusetts and, of course, Nevada, have already passed legislation allowing skill-based slots in their casinos, which means that you can actually walk into a Vegas casino and play some “Space Invaders” right now! How crazy is that, honestly? While we lack the data to really know how successful these new skill-based games are, new skill-based games continued to be manufactured and shipped out as late as only two months ago, and given how the one thing businesses hate the most is spending thousands on products that nobody cares about, it must be assumed that these slots have proven successful enough to warrant a future investment.

While certainly a niche in the West, skill-based slots continue their gradual ascent in popularity, and at this point it’s only a matter of time before we see them here.

Granted, certain markets are more or less likely to get them than others. Germany has recently tightened its gambling regulations immensely, severely limiting how casino games can be presented in both land-based locations and their online counterparts. Slots in particular have been hit hard, with even basic features like auto-play now a thing of the past for German players. As such, it seems highly unlikely that any skill-based game is going to be introduced into that market any time soon. Meanwhile, more gambling-liberal countries like Sweden have already been incorporating these types of experiences to great success. “Social casinos” have not only been offering brand new ways for players to communicate with each other while playing, but also a slew of new online experiences, one of which is skill-based games. Puzzle games like “Elemento” by Fantasma Games have proven to be incredibly popular among Northern Europe’s gamblers.

A New Genre Ripe for the Picking 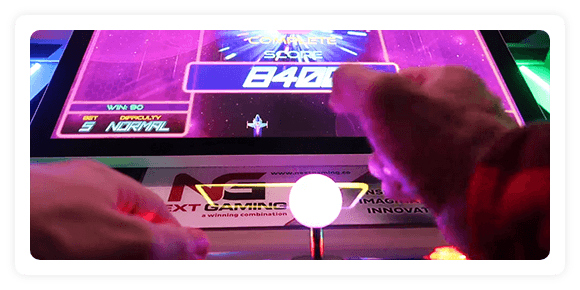 The success of skill-based slots overseas proves it – they’re here to stay. It’s very unlikely that we’ll ever see them replace traditional slots, but that’s okay, maybe they don’t really need to do that. In the UK in particular, the best course of action would be to keep slots as they are and introduce skill-based ones as an alternative, not a substitute. Your dad can go play the NetEnt slot “Gonzo’s Quest”, while you go have fun beating robots in GameCo’s “Danger Arena” – what could beat that? Of course, in reality it’s not that simple.

Gambling addiction is a major concern by the Gambling Commission, and certainly a big reason for its hesitance in approving skill-based slots outright.

As the lines between videogames and slot games continue to blur thanks to aggressive monetization by videogame developers (in the form of loot boxes) and highly questionable mobile games for children like “Spin Master”, the concern that gaming might breed the new generation of gambling addicts is a very legitimate one. But that is precisely why we need legislation The Gambling Commission should not outright ban all skill-based slots, but rather outline what is allowed, what isn’t and what measures can (and must) be taken in order to protect young people from addiction. Skill-based games aren’t going away, and if they’re not introduced to the UK market in a careful, respective way, then they will be turned into a predatory tool that preys on those who would otherwise never touch a gambling machine – the exact thing that legislative bodies fear. No one would win then – and the Commission knows it too. As such, we’re confident, and hopeful, that very soon we’ll get to play some skill-based slots in our local casinos as well!

Top 3 Casinos of the month

Client- and instant-based ways for playing

Top of the line software providers

Can withdraw with PayPal

Up to Bonus
Read our review

Voted Online Casino of the Year for three years running